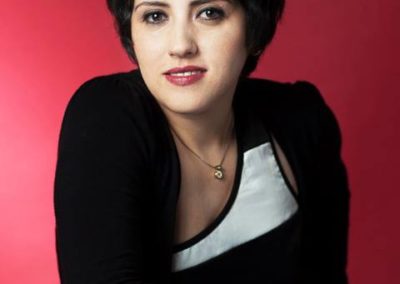 We’re excited to introduce Banafsheh Erfanian, one of our Northbound Gallery Program artists this year! To get to know Banafsheh, we asked her a few questions about herself, her art, and her exhibition with Northbound. Read below to learn more!

Can you tell me a bit about yourself and your art practice?

I am a Toronto based painter, illustrator, and educator. I was born in Tehran, Iran and graduated from Tehran University of Art with a Bachelor of Graphic Design. I also hold an MFA in Illustration. I have been painting and illustrating for 15 years; during this time I have illustrated 30 books and magazines, written more than 25 articles in art reviews, exhibited around the world, and have won several international awards. The stories I have illustrated such as, Arabian Nights, Ardavirafnameh (Zoroastrian Paradise, and Inferno), Shahnameh (The epics of Iranian kings), convey mythical themes and share their messages through magical realism or surrealism that stimulate my ideas. I find these stories to be a platform through which I illustrates what is beyond reality.

What can you tell us about your exhibition?

The sparks of an individual’s identity can be found in their background. Their identity means the ground that holds their roots, the land where they came into existence, the land where they saw four seasons; the taste of their food and water, the costumes they wear, their sun and rain, their mountains and seas, their looks, their language and accent. Shahnameh is one of the most important tales about Persian epics that has been passed down from generation to generation during centuries. It has had such importance that has been patronized by Persian kings to be produced as picture books. My roots as an Iranian-Canadian artist can be found in my culture and Shahnameh is an undeniable part of my culture. Persian literature conveys Philosophical implications and is a window to the Iranian body of wisdom and collective psyche and an endless source of information and creation for an artist with Persian background. This exhibition is a contemporary visual read of Shahnameh addressing the younger Persian generation. I hope I can be a link to this cultural chain and encourage the younger generations of my community to know more about their cultural roots and history.

What do you want people to take away from the show?

This exhibition aims to give the audience a grasp of Persian history and culture through the poet of Shahnameh and the illustrator’s point of view. I hope this will help the Persian younger immigrant generations that have not lived in Iran, but have Persian blood in their veins to know more about Persian literature and have a deeper sense of a part of what it means to be Persian. It would also be an opportunity for youth to enrich their imagination and for Canadians from diverse background, to learn about the Persian literature and art through Shahnameh’s whimsical narratives and my visual interpretations

To you, what role does art play when understanding a culture’s history?

If you take a retrospective look at the history of art, you will interestingly find out that art has been used by the powers as a tool of power reinforcement. For instance, In the Medieval times, illuminations were made to make people have a stronger belief in Christianity. Persian kings used architecture and colossal sculptures and reliefs to show to the nations how powerful their empire was at the time. In Sassanid time, A prophet emerged who was entitled ‘Mani, The Painter Prophet’ because he was a talented painter himself and his followers were attracted to his ritual through painting and music. In fact, art was a magical tool as it is today in the same way. Any form of power has taken advantage of art as capitalism does through commercials today. Apart from the power discourse, I believe any type of art reflects a great deal about the culture of the time they belong to. Artworks are the purest documents of their time through which you can explore people’s look, costumes, rituals, politics, architecture, nature, and the collective insight of the peoples that used to live in the ancient times.

For more information about Banafsheh and her upcoming exhibition, click here.