Benjamin Hackman is a poet, composer, and percussionist living on Toronto Island. His poetry has appeared in periodicals across the country including Canadian Literature, Carte Blanche, and The Literary Review of Canada.

Creatively, what interests him most is the intersection between words and music, and the ways in which songs serve as emotional containers for lyrical content. This preoccupation is intimately explored within his multi-genred ensemble, The Holy Gasp. Their first record, The Last Generation of Love, was released in 2015 by Arachnidiscs Recordings, and funded by the Toronto Arts Council. It was regarded as “a future cult-classic debut” by The Toronto Star; as “undoubtedly one of the best Canadian albums of the year” by Grayowl Point; and as “one of the best albums to come out of Toronto in 2015” by Toronto Music Reviews.

Presently, Benjamin is Composer-in-Residence at the Church of St. Andrew by-the-lake, where he has just finished work on an original film score to the 1925 silent comedy, The Freshman, which was performed live by The Holy Gasp at the Christie Pits Film Festival on June 25th, and is scheduled for an encore performance at Parkway Forest Park on August 26th. A new record by The Holy Gasp is scheduled for release in late autumn. 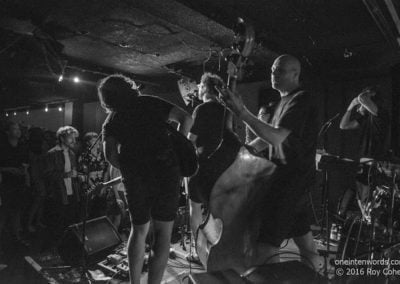