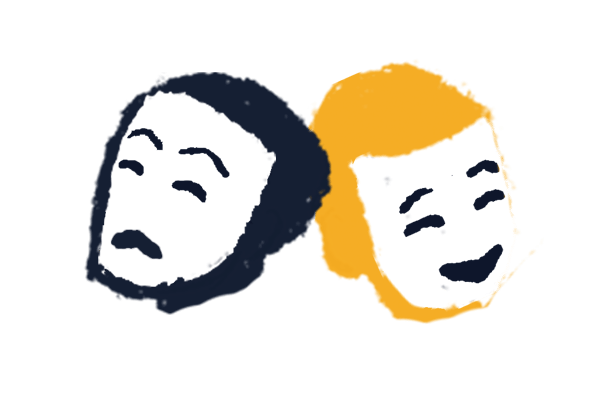 Are you 50+ and looking for a creative way to practice your English?

Second Act Seniors is a theatre-focused ESL program for seniors and adults to feel more comfortable and confident in their speaking abilities.

Second Act is led in English and is ideal for those with basic to intermediate English communication skills.

Participation certificate if you attend a minimum of 7 workshops!

February 18 and 25: Improv with Patricia Tab

Improv is a fun tool to build-up interpersonal and communication skills in a relaxed environment. Through comedy games and physical theatre exercises, these workshops will fuel your creativity and spontaneity, making amusing memories and even potential new friends!

Patricia Tab is a South American performer and writer based in Toronto. She is a Second City Toronto HouseCo and Diversity Fellowship alumn, a Bad Dog Theatre Featured Player and Stage Manager of the Canadian Comedy Award sketch show “Extravaganza Eleganza”. She teaches Improv and Acting workshops in English and Spanish; and was featured in Improv Festivals in Toronto, Montreal and Vancouver.

March 3 to 10 : Public Speaking with Stephan Dyer and Juan Cajiao

Are you looking to overcome your fear of public speaking? Join us and let’s have fun with Improvisation and Stand Up Comedy. We will use humour as the primary tool in order to become persuasive speakers, improve stage presence, and develop self-confidence. We will also talk about how to embrace your accents and roots through the ‘mistakes are opportunities’ mentality.

Stephan Dyer & Juan Cajiao are international, award-winning comedians and public speaking coaches with +20 years of combined experience and +400 shows in 12 countries. Together they cofounded MalPensando, a bilingual comedy school that helps people become funny, confident speakers. MalPensando has been credited with improving the lives of 300+ students through humor and has been a vehicle for countless hours of community service in the Hispanic-Canadian community.

Their weekly shows in Spanish and English in Toronto, sold out public speaking workshops, as well as numerous awards from Toastmasters International earned them the Latin Comedians of the Year Prize by Latin Awards Canada (2017). In 2018, they were also awarded a full scholarship from The Second City and an invitation to TEDxTalks Malaysia. In 2019, they performed at Comedy Central Fest in Mexico City.

A conversation with Maria Montejo (Deer clan) about the land that we stand on and our responsibilities as newcomers to the land and to the original keepers of this land.

Maria Montejo (Deer clan) is a member of the Jakaltec/Popti (Mayan) community of Indigenous people who reside in the Xajla territory of Guatemala. In addition to her formal schooling, Maria has been mentored from a young age by various Elders, Medicine people and Traditional Teachers on Turtle Island and from Central and South America. Maria has had the privilege of being exposed to and participating in various ceremonies and traditional cultural practices, and this has fueled her passion to develop programming that will bridge the Newtonian/allopathic model of wellness and an Indigenous/multi-dimensional approach. She is currently the Manager for Dodem Kanonhsa’ Indigenous Education and Cultural Facility in Toronto.

A wrap up of the program! Have the chance to share what you’ve learned, provide feedback to NYA, and celebrate with your fellow participants.