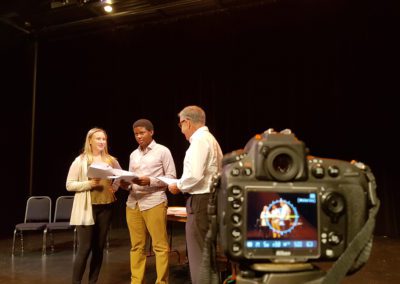 “Evolve! is a response to gaps in resources for performing artists in Toronto who are still in the developmental stages of their work,” said Lila Karim, Executive Director of North York Arts. “The goal of the program is to help support the capacity of the theatre and dance community.”

The program will take place at the Toronto Centre for the Arts (TCA), a major theatre facility located in North York that is part of Civic Theatres Toronto. Specifically, Evolve! will be held in the Studio Theatre, a “black box” style 180-seat theatre equipped with professional lighting and sound systems. This is made possible thanks to the long-standing partnership between North York Arts and the TCA, as well as their shared vision to work collaboratively to bring art and community together in North York.

North York Arts has four groups who are participating during their pilot year, and the plan for the future is to have a juried selection process.

The first group to participate is Cinematoscape – a local multi-disciplinary arts company that focuses on projects for the screen and stage. Simeon Taole, one of Cinematoscape’s founders, says his participation in Evolve! is “like a concert pianist having an opportunity to practice on a piano that’s actually in tune.” He says, “as a theatre artist, being able to workshop the play where you would actually perform is fantastic.”

The other participating artists and arts groups include Victoria Mata, dancer and choreographer;  Dance Immersion, a not-for-profit organization that produces, promotes and supports dancers and dances of the African Diaspora; and Possibilities of Dialogue, an exchange of energy and awareness by dance artists Marielis Garcia and David Norsworthy.

Learn More about Evolve! Participants
Back to News