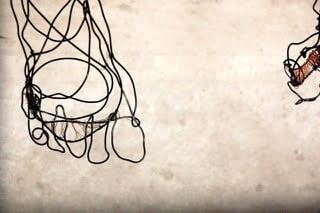 Conversations In Flux: Visible presence unfolding in time and space

The objects, constructed with wire and paint, are bent and shaped into various forms depicting black populations inside and outside of hyper-visible and invisible states of blackness. “My concern as a visual artist in the area of visibility requires that I examine how black subjects maneuver between the points of hyper-visibility and invisibility, to get from one point to the other, you have to move”, said Lurch.  “Marking visibility and making art requires me to envision the black subject visible in time and space”.