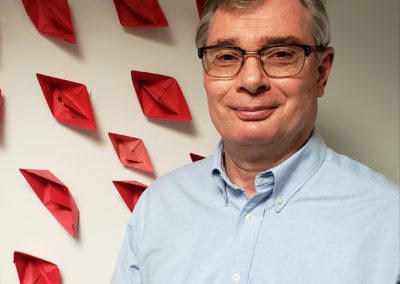 Joe, a self-described art enthusiast, has been a leader at NYA for over 7 years. While acting as an advisory committee member, board member, and (most recently) board president, Joe has provided a great deal of support and expertise to the organization and by extension, the North York community.

As Joe transitions into his new role, we wanted to learn more about his connection to the arts, his involvement with NYA, and exciting plans ahead for the organization.

Tell me a bit about yourself. Have you always had an interest in the arts?

My interest in the arts goes back to an early childhood memory of being taken to what was then known as the Art Gallery of Toronto by my mother. I still remember the Floorburger and Black Bathroom #2. I have been fascinated by art ever since, despite learning early on that while I was pretty good at art in school, I would never be good enough to be an artist.

When did you first get involved with North York Arts and what drew you to the organization?

I began my involvement with North York Arts while it was being developed by the Toronto Arts Foundation. North York holds a special place for me because my early adulthood was spent here. While I tried to contribute to North York at the time, NYA gives me a second chance.

How do you see arts and culture as a catalyst for community development?

It seems to me that arts and culture have an impact at both the personal and community scales. Making art lets people develop and express a part of their inner being and create beauty and joy and articulate meaning in their own and other peoples’ lives. Art doesn’t have to be something that hangs on a wall – it can be spoken, sung, danced, played or shown. It can reach one person at a time or an audience together. At a community scale, the arts allow people to share stories and perceptions and help people see and understand more of themselves and their neighbours. And the arts don’t have to be serious, they can be fun, too!

What kind of growth do you see for North York Arts in the next year?

I hope that North York Arts can expand the breadth of its programs and partnerships and expand its geographic reach into more communities of North York. At the same time, as a charitable organization relying on grants, sponsorships and donations, we have to be careful to not get ahead of ourselves and ensure that we have the financial and human resources we need and manage the risks and commitments we make.